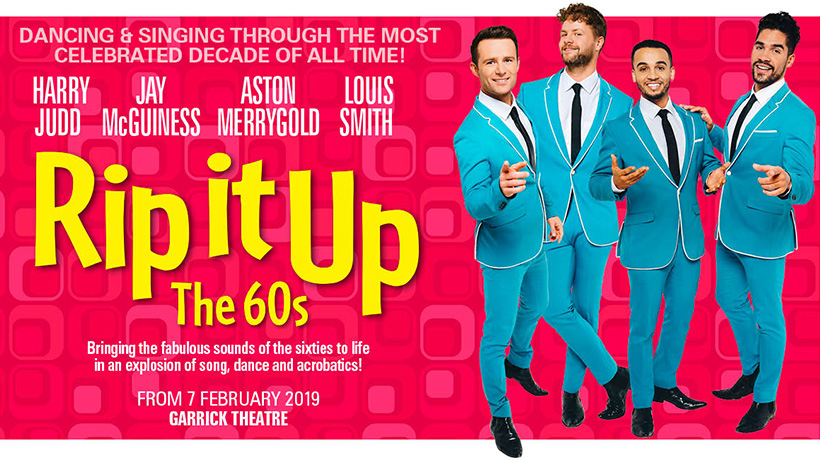 Book Rip It Up

The ultimate strictly boy band of dance bring the 60's smashing into the 21st century, in an explosion of song, dance, acrobatics and amazing visuals!

Aston Merrygold (JLS) and Jay McGuiness (The Wanted) sing, while Harry Judd (McFly) is on drums and Olympic champion Louis Smith performs amazing gymnastic feats. But what shines through the most in this spectacular show is the fab four's phenomenal dancing talent!

The boys are joined by an incredible cast of dancers, singers and musicians, to celebrate the iconic sounds, sights and events of the decade which transformed the 20th Century.

One of the most energetic shows to ever hit the West End stage, just watching will leave you exhausted. Dance the night away with music from the legends who shook a generation including The Beatles,The Rolling Stones, The Who, The Beach Boys, The Byrds, The Doors, The Mamas & The Papas, Dusty Springfield, Burt Bacharach, Elvis Presley, Bob Dylan, Aretha Franklin, James Brown Marvin Gaye, Stevie Wonder, The Supremes and many more.

With celebrity contributions on screen, footage from the era and a host of other visual delights, the show celebrates everything there is to love about the 60’s. The 60's are back with a bang!

Book Rip It Up